Trezeath is a “might-have-been” ex-LSWR “00” gauge branch line layout set in North Cornwall, where the sun always shone. It was built in the 1990’s by the late Richard Lane, and appeared in the “Railway Modeller” as Railway of the Month in 2000. A few years later, I noticed it “for sale”, and was able to purchase it and (just) shoehorn it into my car for the return journey. It first resided in my loft, then, when the opportunity came to acquire a 15’ x 10’ garden shed, moved there. Originally my intention was to connect it to my own part-completed 00 layout and run the two together, but that soon fell by the wayside when I realised that mine was unlikely ever to be completed. That space in the shed was taken over by an “O” gauge layout (also of an ex-LSWR North Cornwall branch line, but the station is a lot smaller!) but that project has stalled – the “O” gauge layout will be sold at some stage. I have rebuilt the control panel and redone some of the wiring – which was in too light a gauge wire for my liking. A few operating sessions followed, with a short fiddle yard, but Trezeath languished for a “when I get the time” moment to appear. Sadly they are few and far between! In January 2012 Trezeath was asked to attend the club exhibition, so out came the thinking cap. It appeared that, with a new fiddle yard, a lot of “tarting up” and some “boxes” to carry the boards in, this might be possible. I apologise in advance for things which are missing – especially working signals, which are dear to my heart, but sadly there still hasn’t been time, although the first new signals are in place, they do not yet work. Couplings are tension lock, Sprat and Winkle, or a mixture of the two (keeping tension lock couplings in the middle of sets, for example). All the scenery has been refreshed with much use of static grass, buildings have been weathered and the ground-cover toned down. The lighting rig has been built for exhibitions. Since the first show, a new scenic board has been built which allows trains to be shunted in and out of the carriage sidings without blocking the fiddleyard.

The station has three platforms and two carriage sidings, so it serves a larger resort than most. There are also general goods facilities, a mill, and loco shed complete with facilities and the aforementioned turntable. Trackwork is mainly hand-built with code 75 rail on copper-clad sleepers, plus some SMP. Almost all of the buildings are scratch-built. The fiddle yard has 6 sidings and slides across the base, alignment is by eye.

As is the case with most layouts depicting branch lines, the scale of operations is somewhat greater than real life. Operation is made more interesting (or difficult, depending on your point of view) by the fact that there are no run-round facilities within the platforms. Trains come and go to a sequence, stock is shunted to and from the carriage sidings, the yard is shunted from time to time, and locos go on and off shed. The sequence of trains is based on the premise that North Cornwall line trains would split or attach at Wadebridge, with portions for both Trezeath and Padstow. A number of the Bodmin-Wadebridge local trains were extended to Trezeath. On a weekday in summer, there were two through trains to and from Waterloo, plus the paper train.

Locomotives are mainly from the excellent recent Hornby/Bachmann models, including M7’s, N’s, and Bulleid Pacifics, plus an O2, an “AC” railbus and an interloper from elsewhere – a Hornby “700”. There are Bulleid, Maunsell and Mark 1 coaches, and a push-pull set. Most of my own stock is ready-to-run, weathered where possible. There are some Parkside Dundas kits around, and I have borrowed stock from fellow club members to ensure I have enough. They have helped me with the “tarting up” phase too, and I am very grateful for this, as without their help the layout would not have been ready in time – they  also help me operate the layout. The turntable, by the way, is now digitally controlled by winding a handle: the motorised version proved too difficult to get working properly, but it may yet happen. The layout has now been converted to run under DCC control, using the Gaugemaster “Prodigy Express” system. 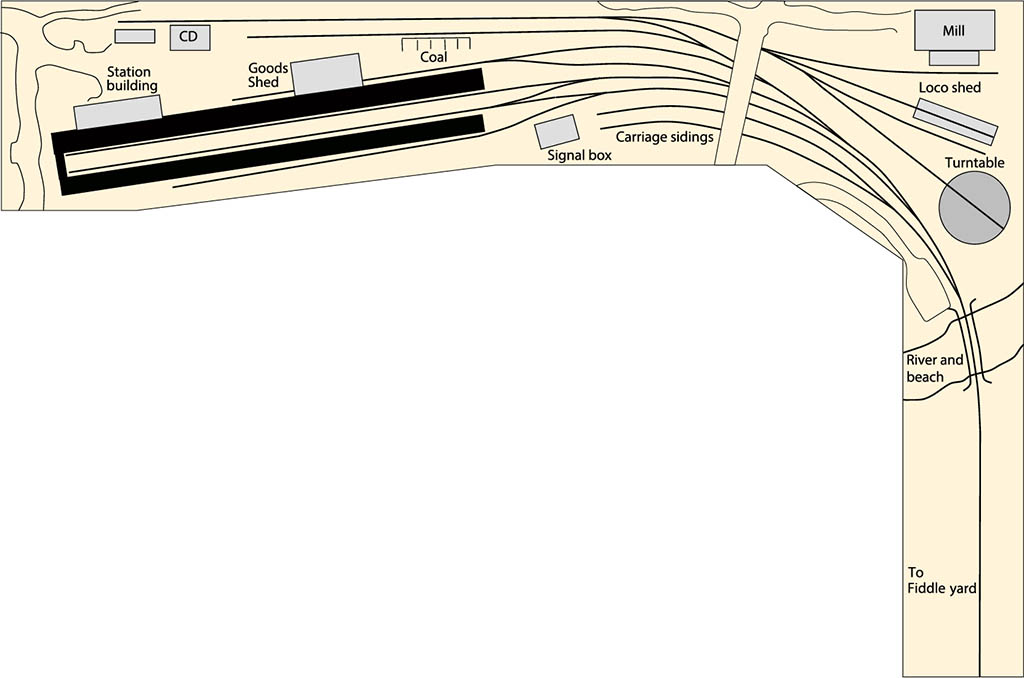 Please ask if you have any questions – hopefully it will be possible for someone to be at the front of the layout for just this, otherwise, please wait until that offending coupling has finally become disengaged!